The subresearch question for indirect observation was

The reason to use indirect observation was to get an outsider’s view of the relation between immigrant women and their built environment.

While doing indirect observation I noticed that the research data I was gaining was partly overlapping with the research data I had already got from structured interviews. Therefore, this section answered also to these earlier subresearch questions:

At the same time I was also open for still new subresearch questions and research data to come to the fore according to the principles of the grounded theory.

Even though I had used direct observation partly already during the walking interviews, in indirect observation I was able to concentrate fully on the actual observation with my own senses. Thus I could go more on details and hence enrich and deepen my research material.

I conducted indirect observation with the same methods that Jan Gehl has used in his research: I observed, counted and registered immigrant women who were either moving or staying in some way or another in certain urban places at certain times under certain weather conditions. I did this also for Finnish women in order to find out if there was any difference between immigrant and Finnish women’s behaviour.

I based my distinction between the immigrant and the Finnish women on their looks and talking. Therefore I may have missed part of the immigrant women in my observation, if they have looked like Finns and spoken Finnish.

In this section I included also girls in the group of women, because it would have been too demanding to draw a line between an adult and a child while walking and observing numerous other things. Girls are also future women and the way they use their housing area, reflects much the way their mothers use the area. Besides, there were only very few girls whom I saw moving in Suvela. Among staying people their amount was generally higher but this depended much on the activity performed in the urban place.

Moving in this case study meant

I gathered the research material during systematic walks which followed the same route each time (the continuos line in the picture). The route was almost the same that I had used for the walking interviews. I also made almost as regularly an additional loop-like walk just to observe people in the surroundings (the dashed line in the picture).

During the walks I kept in my hand a tiny note book where I marked my tally while walking. Sometimes I sat down for a second on a bench at an empty bus stop or in a quiet corner of a park to do it so that my activities would not draw any attention. I usually summed up my markings right after the walk in my parked car. My final research material thus consisted of primitive charts in tiny notebooks.

I chose such time periods for observation when I presumed that immigrant women would be most active in public places in Suvela based on my own experiences as a mother having taken care of children at home. These were on weekdays

I presumed that these were the time periods, when immigrant women could go outside for example shopping or playing with their children. For Saturday morning and afternoon I chose earlier time periods than for Sunday, since Sundays are still for most people a day off, when people sleep and eat later than on weekdays. However, in the evening the situation is vice versa, when people get ready for the coming new week and go to bed earlier than on Saturdays.

I picked the kind of days for my indirect observation, when the weather was so warm and dry that it would allow staying outside. Furthermore, I wanted that there would be as small a difference in temperatures between the chosen times as possible so that the observations could be comparable. As a result I collected my research data in altogether ten different days. 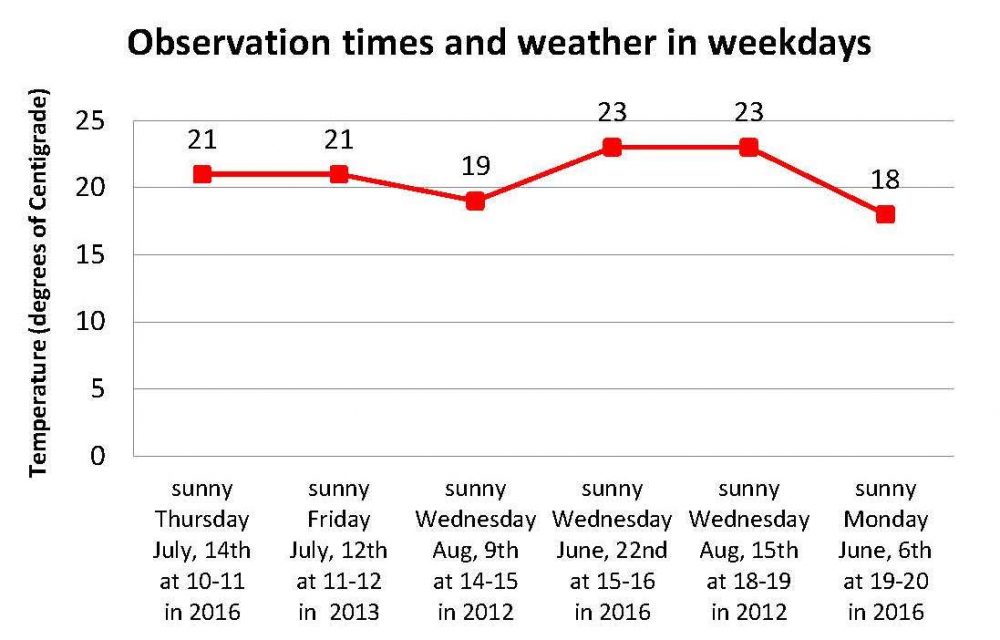 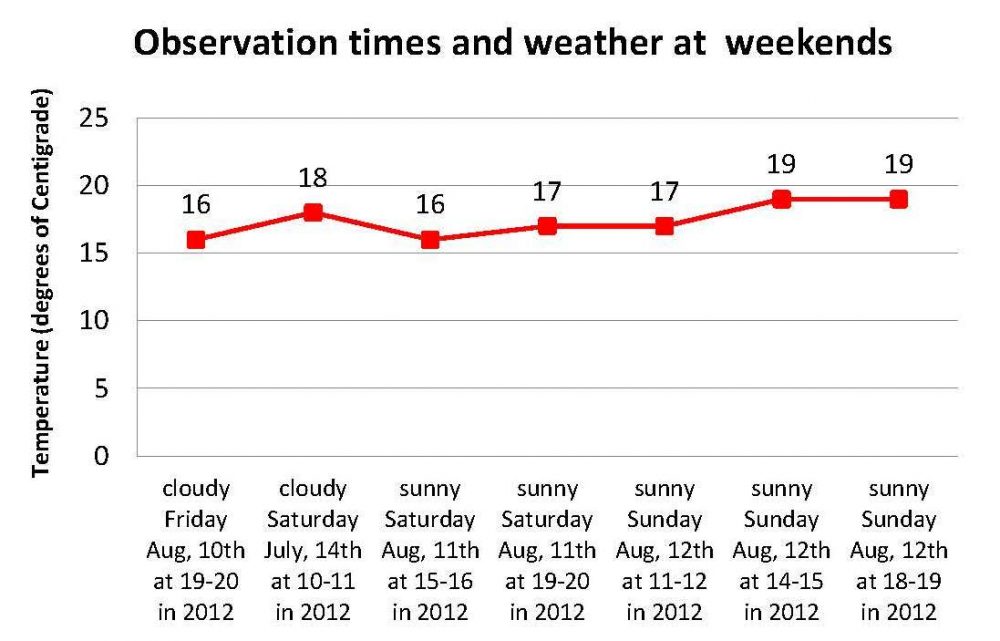 I collected the research material during three separate summers in 2012, 2013 and 2016, because I had made some omissions in the beginning and had to fill them in later on.

I used the division ’moving – staying’, which I used for collecting the research material, also for its analyzing.

Structured interviews had shown that the most pleasant urban places in immigrant women’s opinion were the residents’ park of Suvela and the Entresse shopping centre. On the other hand mental maps had shown that immigrant women used Kirstinmäki, Sunantie and Siltamäentie as their route between these two urban places, even if the Kirstinharju pedestrian street is the shorter way and has more greenery and less traffic noise.

I therefore compared the amount of all the moving immigrant women on both Kirstintie and Kirstinharju in order to check, if the paths in immigrant women’s map drawings really told the truth. I also compared them with the Finnish women to see, if there was any difference in their behaviour. I counted all whom I either passed during my walks or whom I saw ahead of me so close that I was able to discern, if they were immigrants or Finns.

Both the immigrant and the Finnish women used distinctly more Kirstintie than the Kirstinharju pedestrian street and approximately also in the same ratio (71-29 % / 74-26 %). 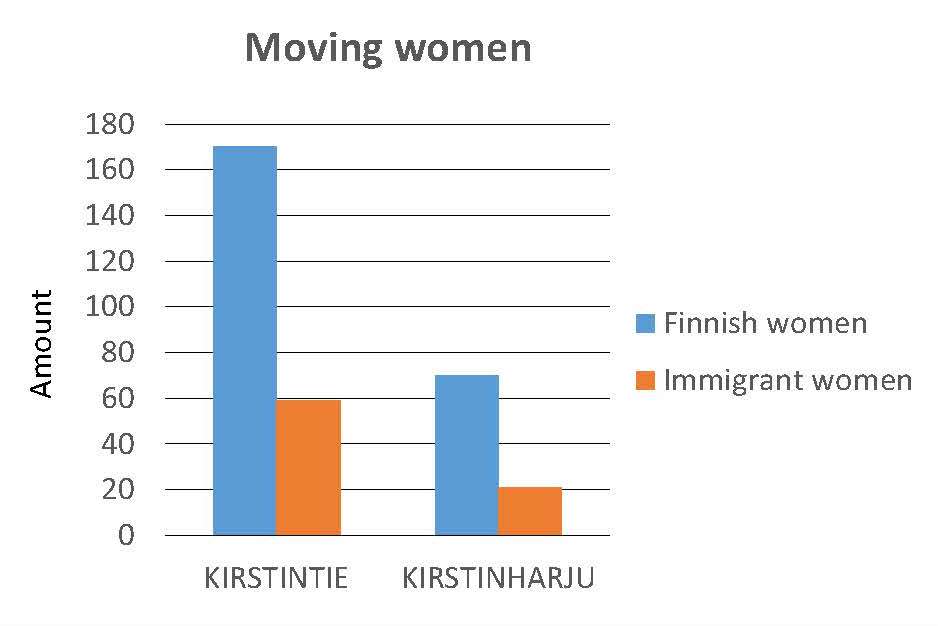 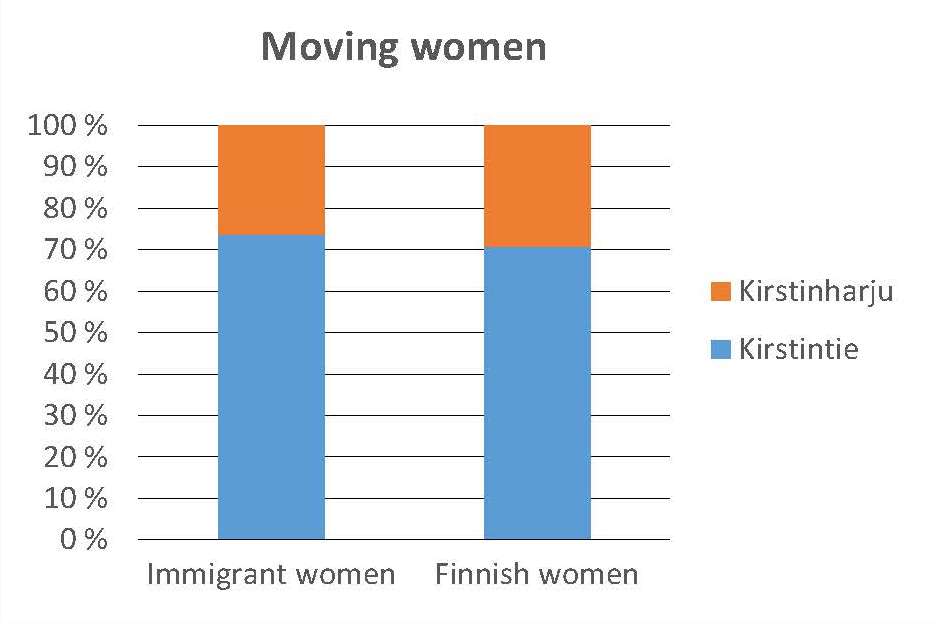 Time of the day or the week did not make any difference from this big picture. Immigrant women used Kirstintie more often both in the morning, afternoon and evening as well as during weekdays and at weekends, and so did Finnish women.

However, when looking more closely at the time factor, it is noteworthy that immigrant women’s moving increases clearly towards the evening, while Finnish women move rather evenly throughout the day. 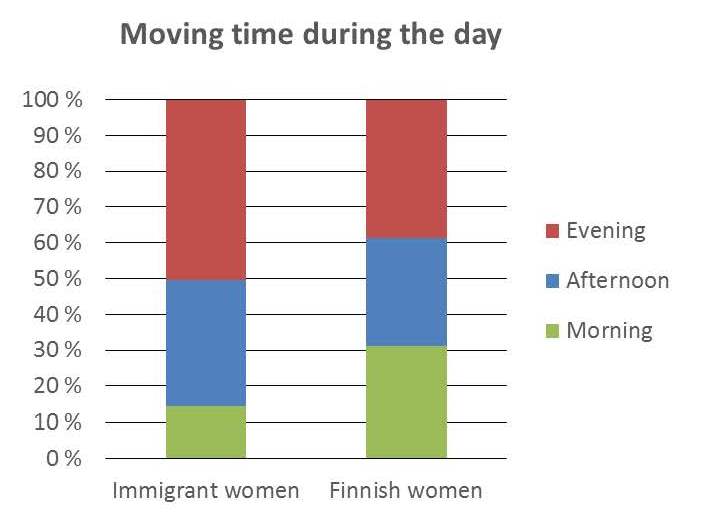 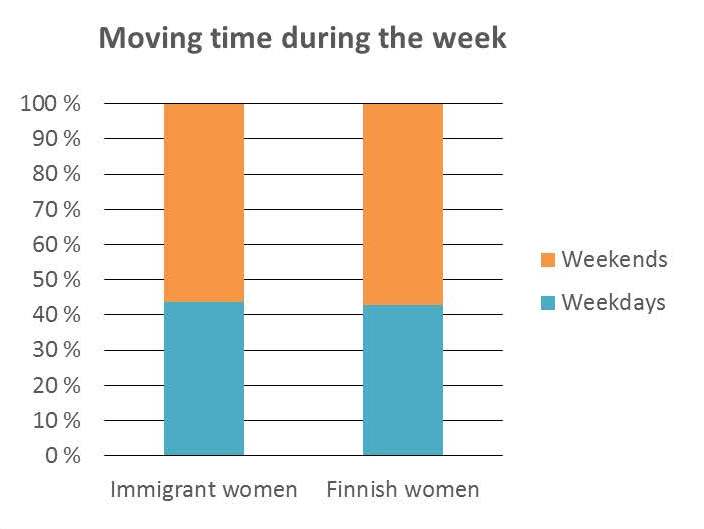 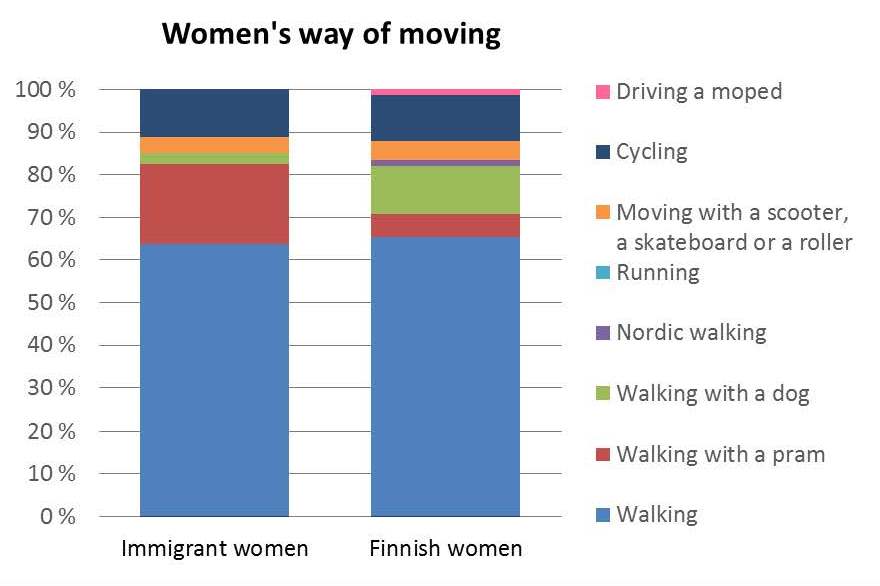 I therefore decided to observe, in which urban places immigrant and Finnish women stayed along both streets, and counted and registered all the women and girls whom I saw there.

I also chose some urban places where I saw staying women during my first trial walks like the terrace of the bar Satulinna, for example, even though it had appeared so far only as one of the most unpleasant urban places in Suvela in my case study.

Another urban place where I saw immigrant women was the yard of Voimanpesä. This yard opens up towards the Kirstinharju pedestrian street like many other yards that belong to the blocks of flats on the northern side of the pedestrian street. During my first trial walks I noticed that there were women also in these other yards, so I did not choose Voimanpesä as a single place but treated it as a part of a group of yards.

There was only one yard on Kirstintie that was located similarly in a close connection with the street: the yard on Kirstintie 6. This was the third urban place where I saw women and girls during my first trial walks and which I therefore added in my observation list.

All in all, the urban places that I chose for observation, were

Even if also the Suvela kindergarten, the Alepa shop and the old chapel of Suvela were located either on Kirstintie or the Kirstinharju pedestrian street, I did not pick them, because I did not see any women or girls staying there during my trial walks.

The residents’ park of Suvela was indeed the urban place where immigrant women and girls stayed definately most and both relatively and  quantitatively even more than Finnish women. The second most popular urban place was the parkour-park for both immigrant and Finnish women and girls. However, immigrant girls played next most in the yards while Finnish girls played in the Kirstinkenttä sportsfield and the Kirsti school. Also noteworthy is that I never noticed any immigrant women sitting in the terrace of the bar Satulinna, even if I walked so close by the terrace that I was able to see and hear the sitting people very accurately. 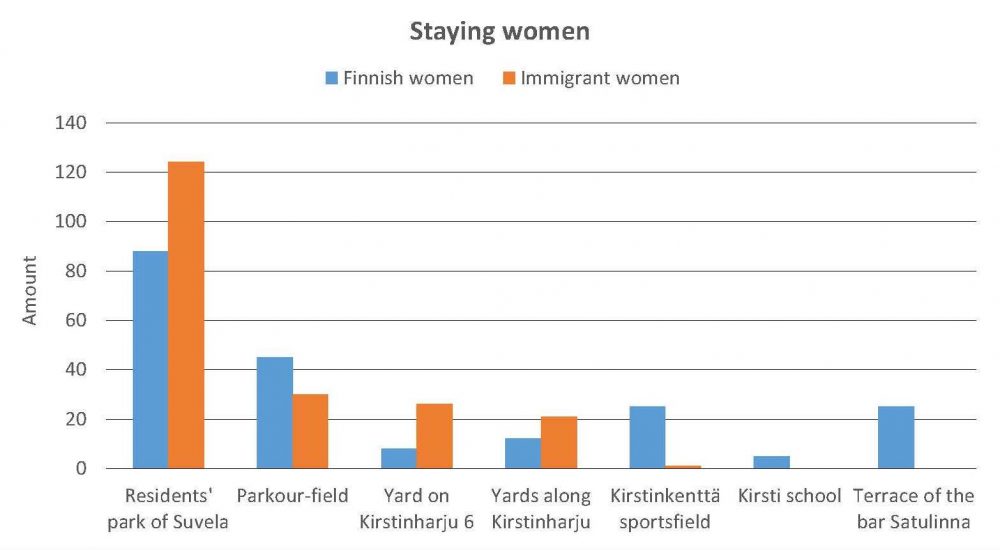 My observation showed that the three most popular urban places that made immigrant women and girls stay outside were located on Kirstintie: the residents’ park of Suvela, the parkour-field and the yard at Kirstinharju 6. The only urban places along the Kirstinharju pedestrian streets where immigrant women and girls spent their time were yards of the blocks of flats and by far not in the same scale as on Kirstintie.

All the other urban places were used mainly for playing except the terrace of the bar Satulinna, which was used only for sitting and drinking.

I still wanted to make a closer look at the street environment itself to see, if there were some differences between Kirstintie and the Kirstinharju pedestrian street that would explain their utilization degree. 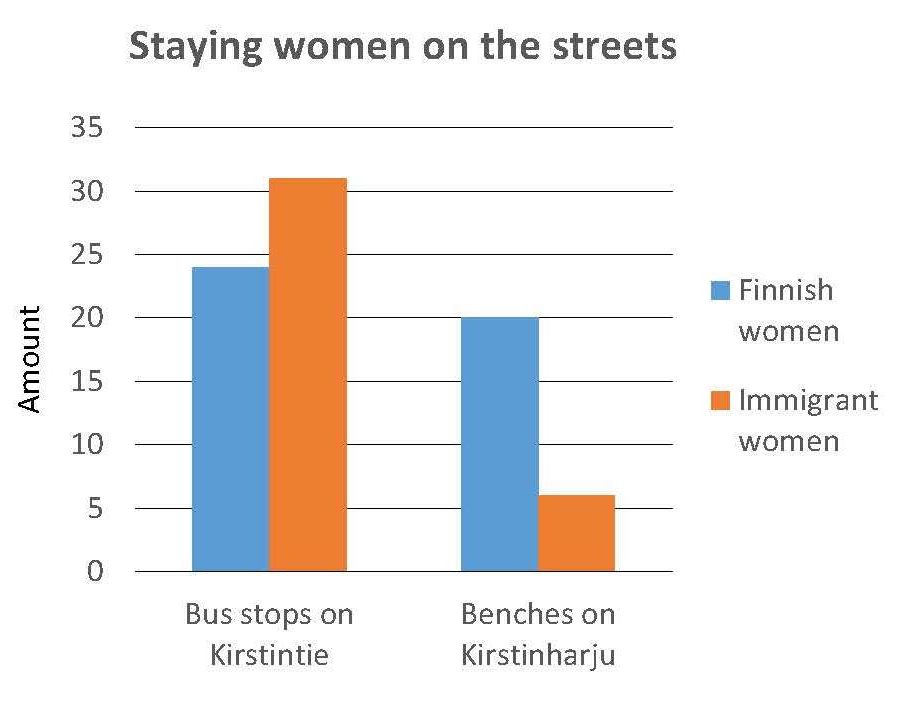 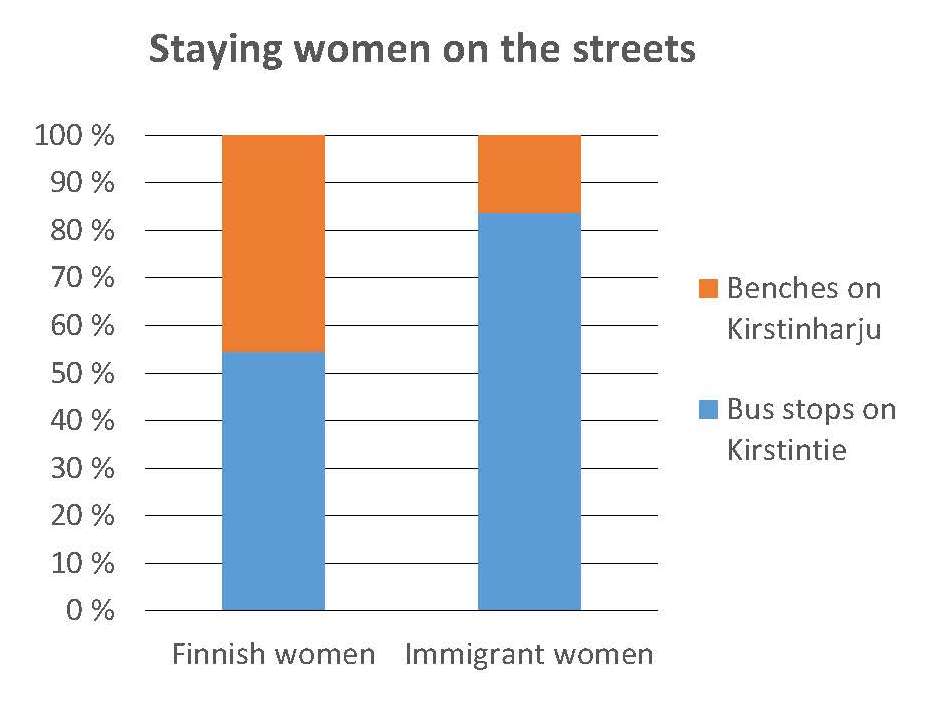 A more probable reason, however, was that Kirstintie offered more social control than the Kirstinharju pedestrian street. Kirstintie has more such urban places that attract people to move, and also those urban places that attract people most. The residents’ park of Suvela was the urban place which gathered immigrant women most and more than Finnish women even quantitatively. Thus it seemed to be true that the residents’ park of Suvela is immigrant women’s most important everyday hub, most pleasant urban place and most distinct node in their mental maps.