The subresearch question for photovoice were

With photovoice I tried to gain reasoning for immigrant women’s viewpoints of Suvela. I also wanted to gain more detailed information about their viewpoints with a different kind of media. Because the informants were all new to me in this phase, I was able to check again, if the research data I had got in earlier phases of my case study was aligned with the new research data and vice versa. Therefore photovoice answered anew to the following subresearch questions:

Lastly, I still wanted to see, if there was something left to be discovered about my research subjects – participatory city planning methods and urban places – or if my case study had reached its saturation point according to the grounded theory.

Because I already knew how much work it was to reach the informants, I also knew how much work it would be to make complete strangers to function as a group. Therefore, I decided to utilize existing groups to ease my work. I took contact with Omnia, a workers’ institute, which offers Finnish language classes for immigrants. I thought these language classes would be a win-win solution for participation in my case study: Immigrant women would learn Finnish and I would get my research material. It also turned out that extra pair of hands, ears and eyes was indeed warmly welcomed.

The two groups that I chose, were meant especially for immigrant women who are taking care of their children at home. Both of these groups had their classes at the centre of Espoo twice a week: in the Entresse library on Mondays and Thursdays at 10-11:30 and in the open daycare centre Suviniitty on Mondays and Wednesdays at 9:30-11:15.

There were twelve immigrant women in each group. However, their amount varied from class to class enormously (see closer the participatory city planning methods in the learning process) and many either dropped out or came along during the semester. A little later on even two men were allowed to attend the Entresse group, because there were still vacant places in the class due to dropouts.

Even though the classes were held at the centre of Espoo, attendants of both classes came from different housing areas in Espoo. Only seven of them lived in Suvela, and during my fieldwork one of them moved to Tuomarila. I managed to get five of these to attend the photovoice fully. They represented the following nationalities:

I attended the groups during September, 3rd – December, 10th 2016 altogether 38 times, 20 in Entresse and 18 in Suviniitty. It was not my intention at all to follow the classes so intensely. The reason was that it was not that easy to get the disposable cameras back (find the explanations in the findings of the case study).

The photovoice procedure included the following steps in both groups:

After the class was over I still made an appointment with three women (one Estonian, one Egyptian and one Kenyan) to discuss about their pictures more accurately in personal interviews, because in group discussions there was time to handle only part of the pictures. I also attended the last meeting of both classes to deliver the paper photographs sized 10 cm x 15 cm to the attendants as a memory of their participation.

I presented the photovoice assignment (the step number 3) to both groups in the following way:

I presented the content of the photovoice assignment both orally and in a written form with the following instructions:

Distribution of the pictures and the discussion about them (the step number 7) happened according to the following structure:

Finally, my research material consisted of 69 pictures as well as my notes about the two group discussions and three personal interviews.

I included in the sample all the pictures that were photographed in Suvela and at the centre of Espoo both outside and inside, even though the original assignment was to take pictures only outside. Pictures of the interiors had been taken either at the shopping mall of Entresse or Espoontori or at the photographer’s home, which may be have been hard to catch from the outside. Furthermore, I counted in all the pictures that had turned out clear enough to see what they represented, no matter if the photographer had taken more than one picture of the same place. The amount of pictures just showed, how important the spot was to the photographer.

I let the teachers of both classes comment my notes about the group discussions to ensure that I had got them right. I did not videotape or photograph the group discussions, because one of the participants had been frightened about how I could keep her identity in secrecy in my research. I presumed that this could be a wider problem in groups with many refugees. In addition, both groups included many Muslim women whose religion very often prohibits photographing and videotaping people.

I have divided the research data to objects and attributes: The objects are the urban places appearing in photographs and attributes are their qualities and features. Both the objects and their attributes are based mainly on my written notes about the group discussions and the personal interviews. In few unclear cases I have first compared the notes with the pictures they were connected to or with the research findings from the earlier phases in my case study, and then made interpretation based on them.

The number of objects that attendants mentioned in discussions (86) was about 1,2 times bigger than the amount of pictures themselves (69).

Immigrant women photographed and mentioned most ordinary blocks of flats and streets as nice and pleasant urban places in photovoice. However, there was hardly any difference in frequency between them and the other urban places. 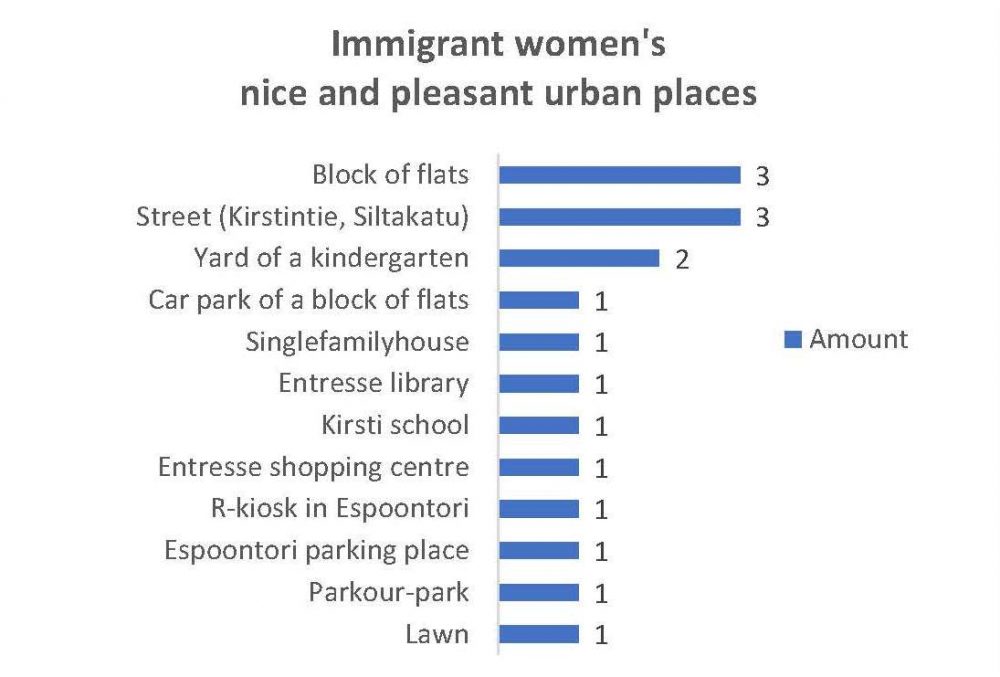 The amount of different tedious and unpleasant urban places that immigrant women photographed and mentioned was bigger than the amount of different urban places in any other category. The most tedious and unpleasant urban places were thickets, woods or fields, which immigrant women considered as untidy and/or useless. Health centre environment meant here the one at the centre of Espoo unlike in structured interviews, where health centre meant the one in Suvela. 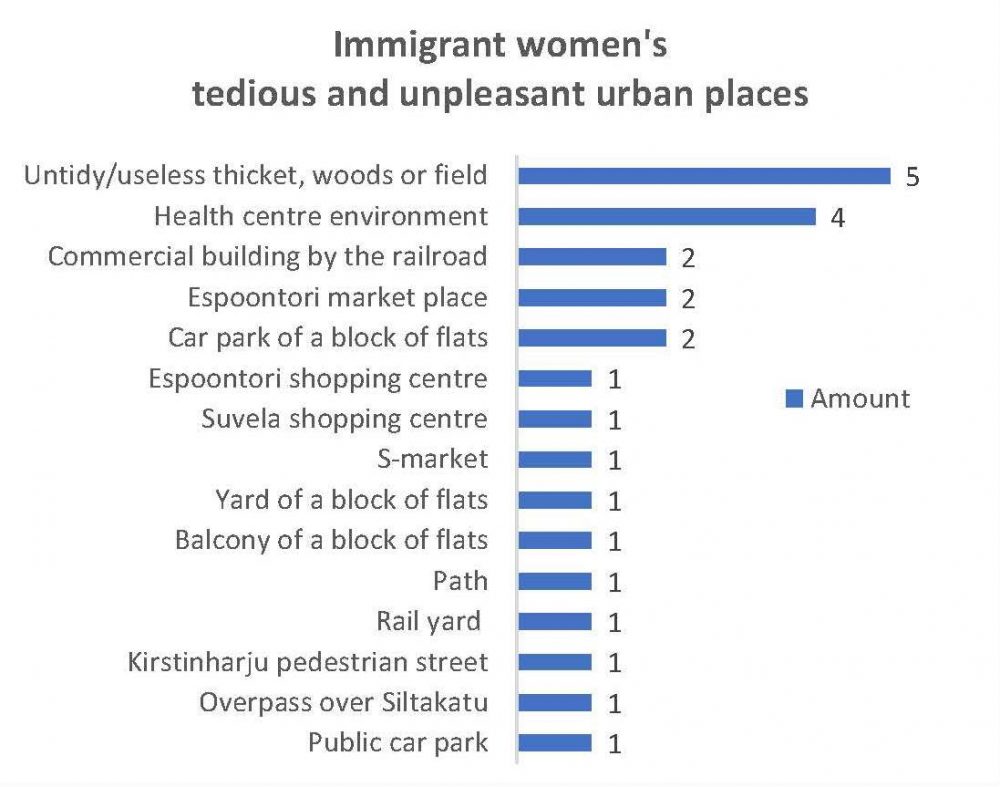 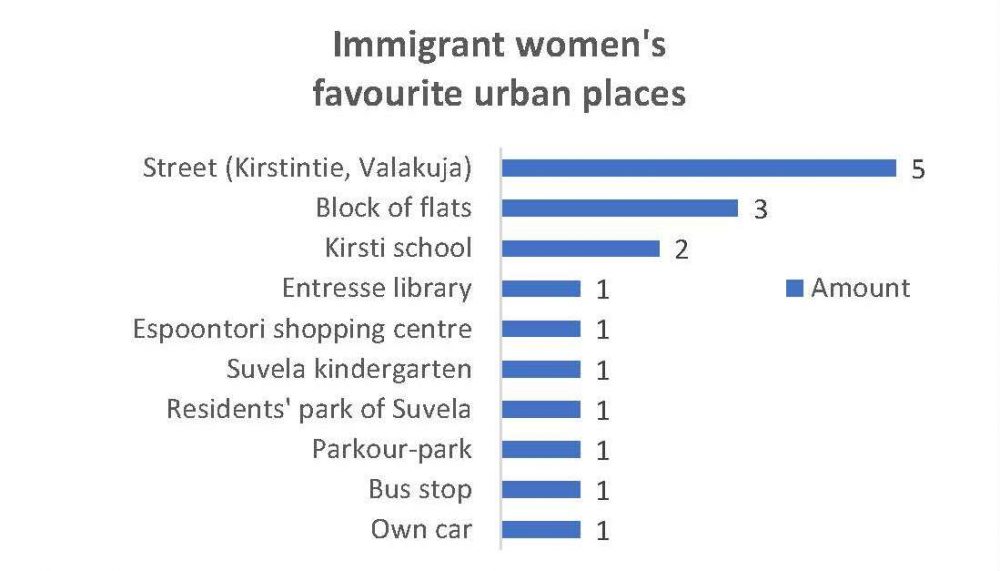 The selection of different frightening urban places immigrant women photographed and mentioned was the smallest of all categories. The fear immigrant women felt in them was connected either to their own or their children’s safety.

When immigrant women could photograph whatever urban places they wanted, the most popular objects were their own or their friends’ homes and yards of these blocks of flats. 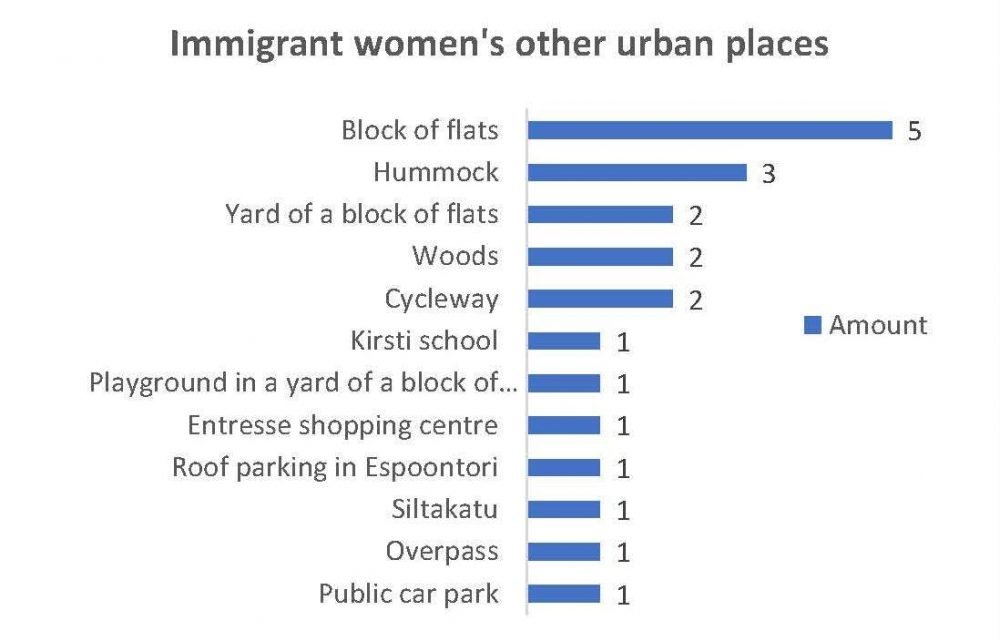 In addition to examining the objects per se, I compared the findings concerning them with the outcome from the structured interviews for the sake of triangulation of the research. This was possible, because both phases in the research posed very similar questions to the attendants. I parallelized the questions with each other in the following way:

Attendants of the photovoice tended to bundle the questions in the same way: Some attendants either took pictures of the same spot for two different questions or they used the same picture for two questions. The question number 5 in photovoice (what else would you like to photograph) produced pictures that included both positive, negative or neutral places.

All in all, there were proportionally more different urban places that were considered positive by the attendants in photovoice, whereas in structured interviews the relation was vice versa as the following charts show: 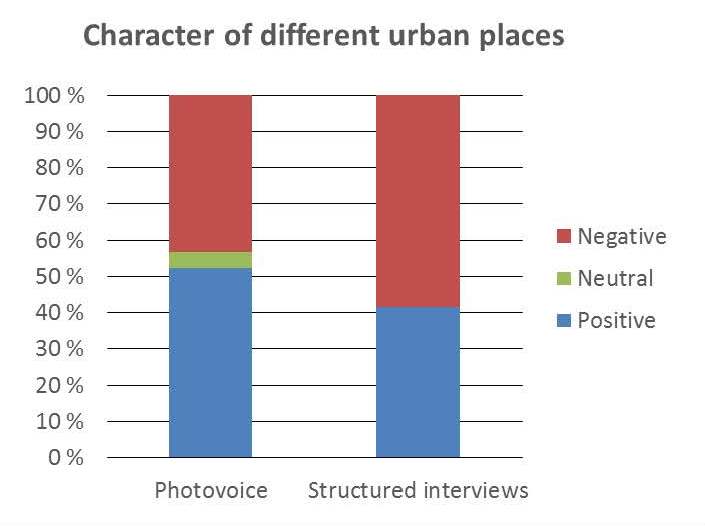 However, the difference is rather small. 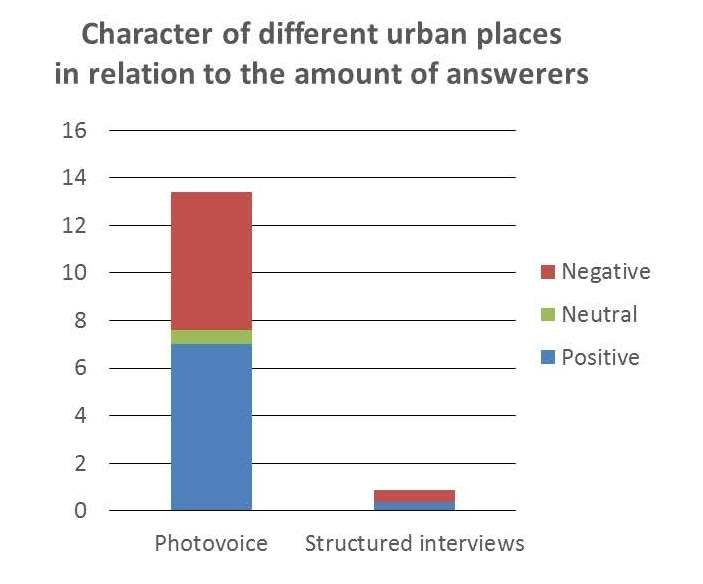 The biggest differences between the results from the structured interviews and the photovoice were, however, in the land use that the positive and negative urban places fell in. 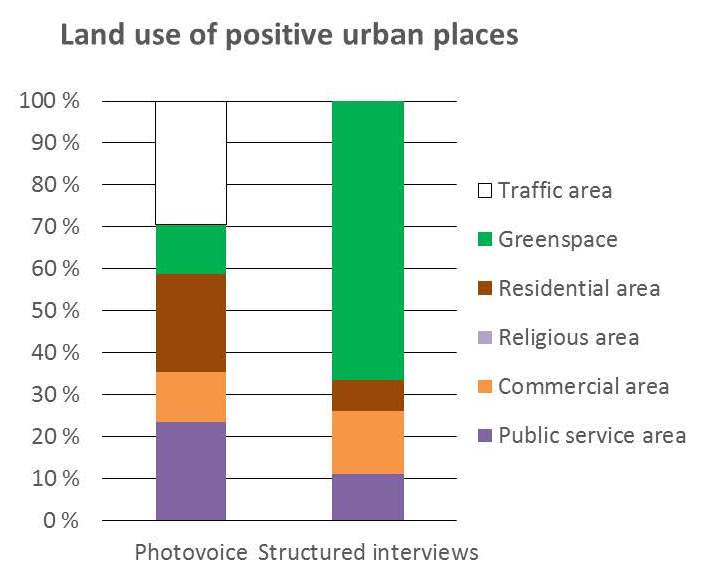 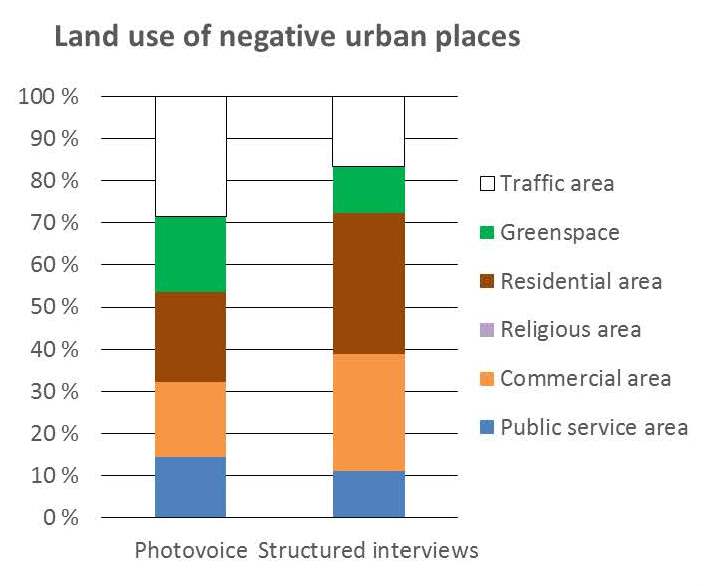 It is the method and the question that explain at least part of the described differences. I collected most of the sample in structured interviews at the residents’ park of Suvela, which may have biased the results concerning the most pleasant urban places. While in structured interviews the attendants only had to recall and tell the answers, in the photovoice they had to go to these places to photograph them at first and only then tell about them. When you are looking at your home environment through a camera lens, you tend to notice things that you have not either noticed before or just remembered. Consequently you end up with a larger variety of urban places in all assignment categories. The question in photovoice also guided towards multiple answers while in structured interviews it aimed at only one answer.

There was a lower percentage of all the different urban places that were located in central Suvela in photovoice (47 %) than in structured interviews (85 %). In photovoice the other half of all the urban places were located elsewhere at the centre of Espoo. This fact can tell about two things: Immigrant women move as much in central Suvela as in the centre of Espoo even with a camera and even with their small children along but they identify themselves strongly with Suvela itself rather than the centre of Espoo. However, the question in the photovoice and the structured interviews can explain some of the difference also here: In photovoice I used ’housing area’ instead of ’Suvela’, because the photographing task was performed in the Finnish classes also by many such women, who came from other housing areas of Espoo than Suvela. This small change in questions let the women themselves define the borders of their housing area.

I categorized the attributes of all the objects (different urban places) in photovoice by using … coding. I tried to find such categories that would resemble plan provision categories (written plan regulations) of city plans in order to ’translate’ immigrant women’s needs concerning urban places to the ’city planning language’.

I found altogether 12 following attribute categories (the first number shows how common the category is and the second number the amount of mentioned definitions in the category):

Even though the category ”people” does not fall directly in the plan provision categories used in conventional city planning, indirectly they do: The use of different areas is always targeted to certain people.

The emphasis of different attribute categories varied between different urban places as the chart below shows. 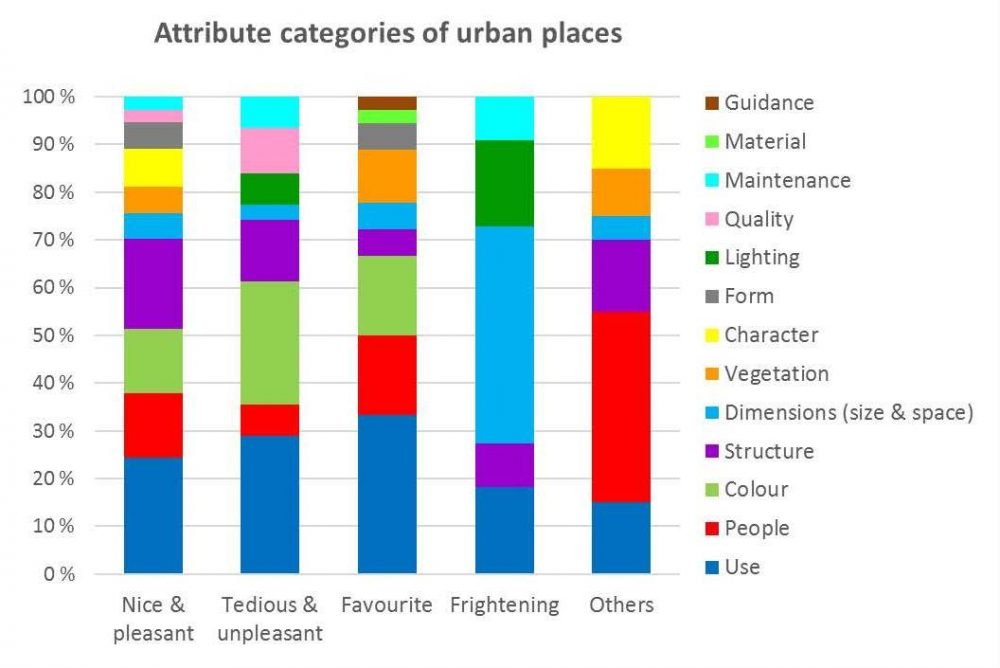 Attributes concerning positively experienced urban places were (both categories and attributes in the frequency order):

All in all, immigrant women like such urban places, which

Both streets and cars can be seen as means of moving out to different urban places from the home sphere for immigrant women who are taking care of their children at home. It is much more easy to move around with a car in comparison on foot with a trolley, for example.

It is the use and the people that define urban places most meaningful for immigrant women.