The subresearch question for mental maps was

The reason why I decided to use cognitive mapping as the next research and city planning method was the wish to find out, how immigrants perceive and orient themselves in Suvela.

All immigrants have lived in a culturally different built environment before their immigration to Finland. When they arrive here, they still carry images of these past environments in their minds, which again influences on how they observe and grasp their new environment, Suvela.

I gathered the research data as a random sample almost entirely in the residents’ park of Suvela – I gained only one map drawing at the shopping centre of Suvela – during September, 25th – November, 11th in 2011.

There were altogether 22 attendants in this section of my case study. They all lived in Suvela at that moment and represented the following nationalities:

I asked the attendants to draw a map of Suvela with the following line:

”Please draw a map of Suvela to your friend, who is coming to visit the area for the first time.”

As a result I got 30 drawings of immigrant and Finnish women’s mental maps as my research material, which I then classified and analyzed with the help of Kevin Lynch’s city image elements.

Lynch has presented that people usually apply five different elements to structure the built environment in their minds: 1) paths, 2) edges, 3) districts, 4) nodes, and 5) landmarks. Lynch describes them in the following way:

I divided the research material I had gained from immigrant and Finnish women into three different groups:

1. Static ’Suvela of places’ appeared as a loose group of either abstractly shown places or conretely shown buildings, where places or buildings were bound to each other only by their proximity.

Map drawings that belonged to this category included some of the following city image element compilations: 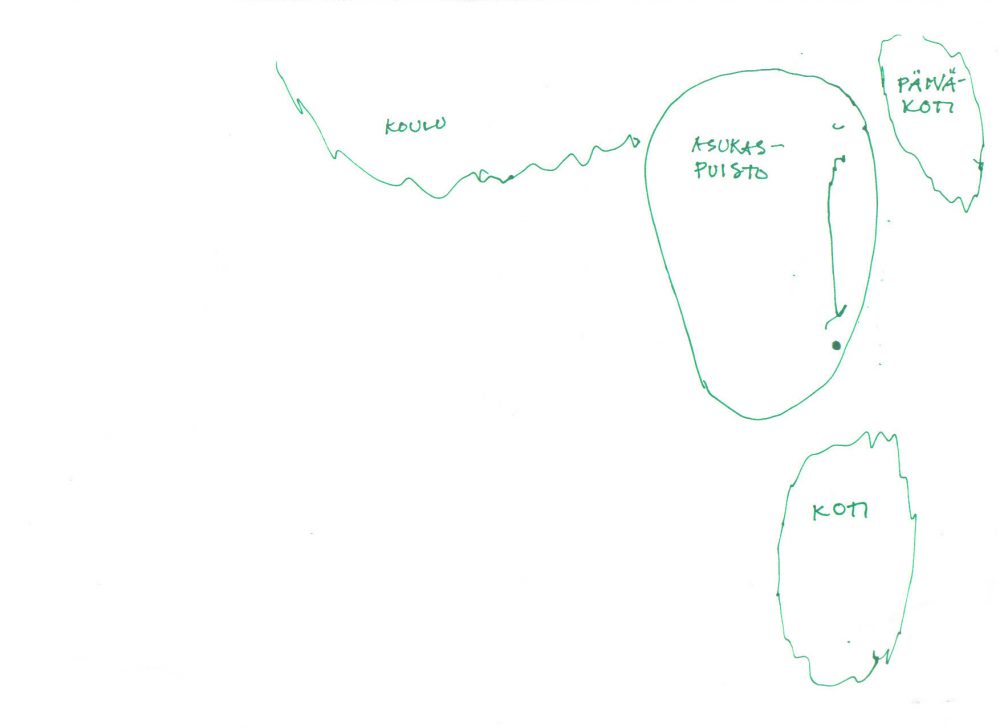 An example of a city image where Suvela is mainly a static group of different places. 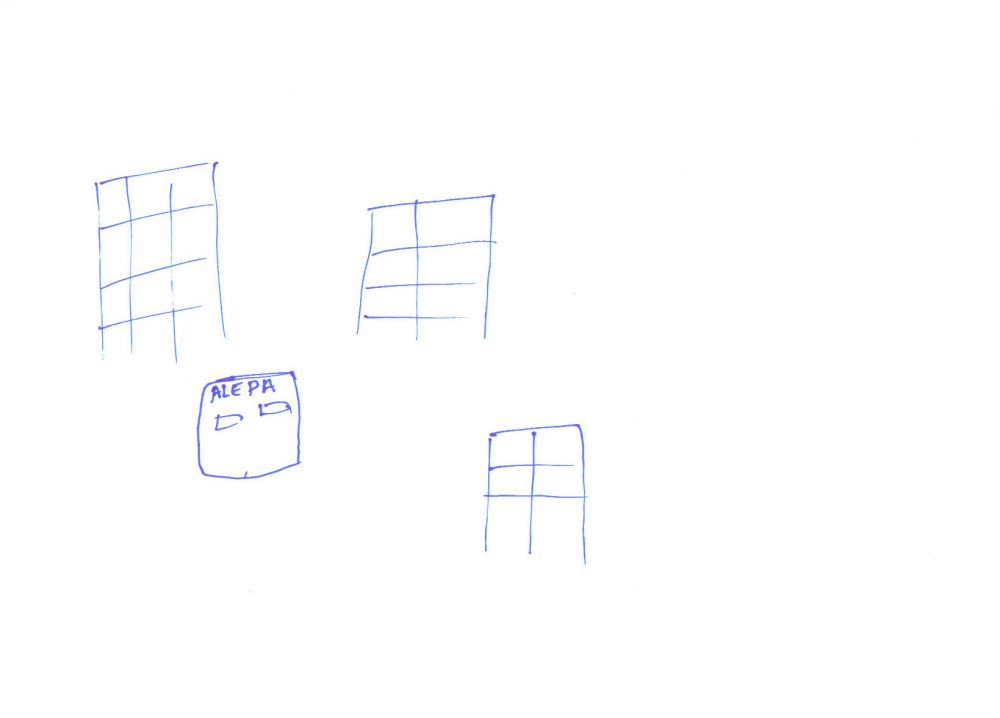 Another example of a city image where Suvela is mainly a static group of different places.

2. Dynamic ’Suvela of paths’ appeared as a weave of crossing paths, where named places or buildings bound the paths in their positions.

Map drawings which represented this category included some of the following city image element compilations: 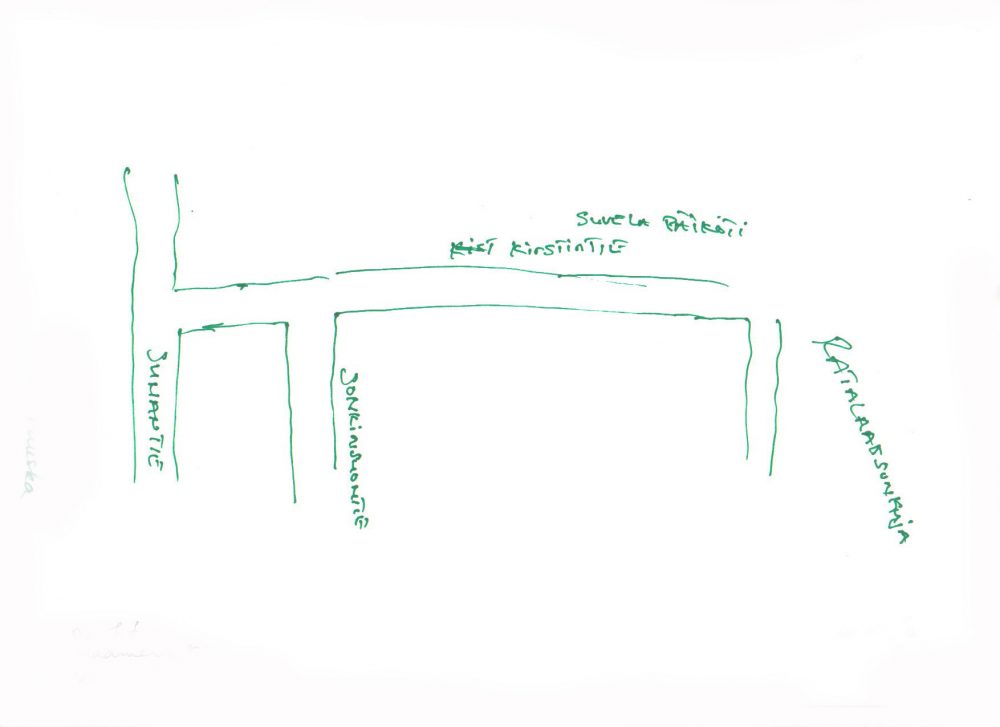 An example of a city image where Suvela is mainly a dynamic fabric of paths between different places. 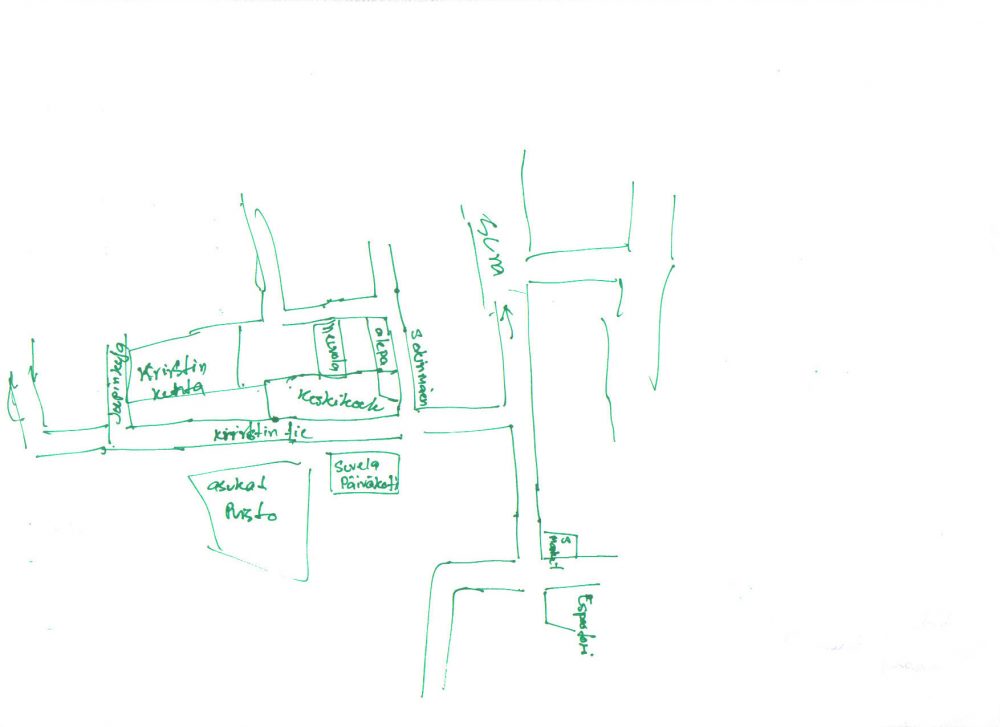 Another example of a city image where Suvela is mainly a dynamic fabric of paths between different places.

3. Diverse ’tourist map Suvela’ was a composition of places and paths, where places had diverged into clear districts, landmarks, edges or nodes and where paths had become more accurate with nodes in the cityscape.

Map drawings that were included in this category included some of the following city image element compilations: 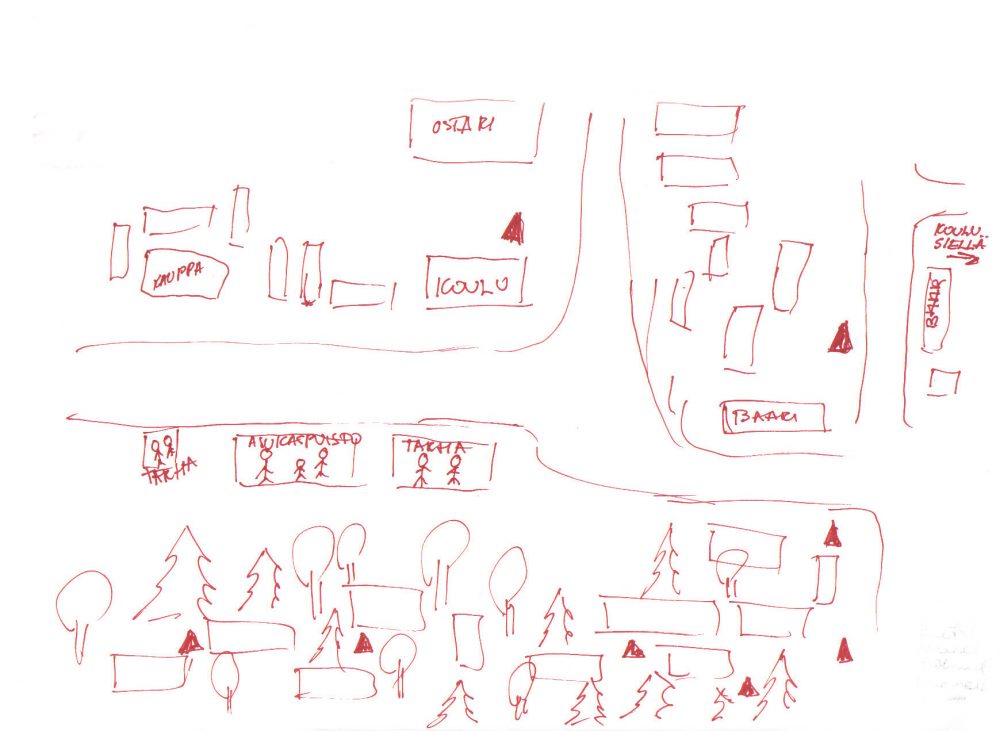 An example of a city image where Suvela is a combination of the previously mentioned city image types and which has been particularized with districts, edges, nodes and landmarks. 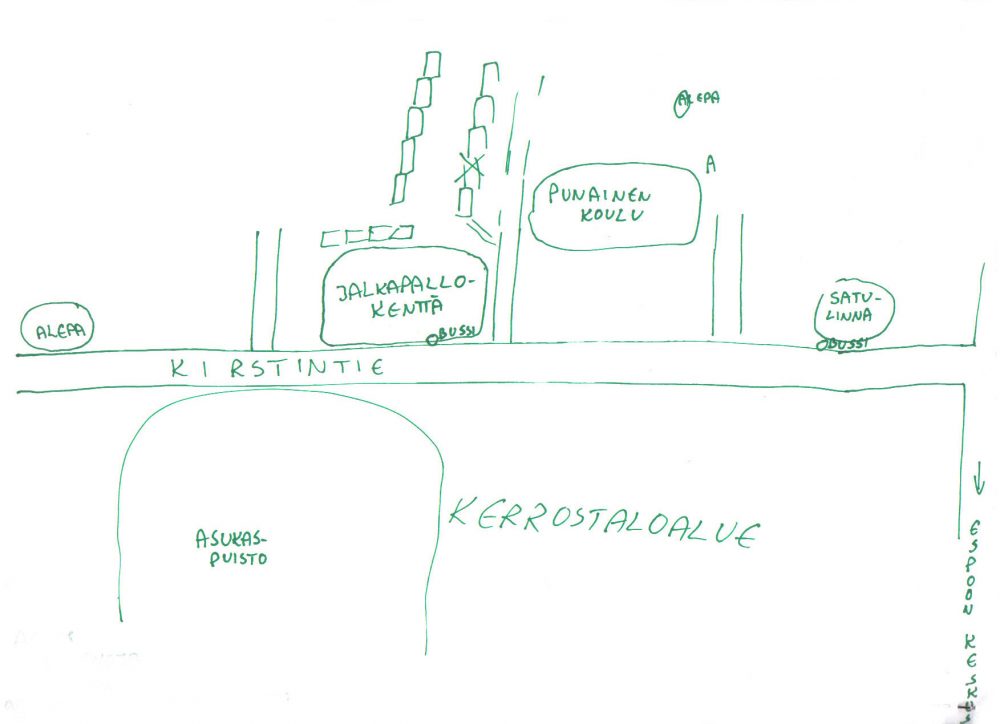 Another example of a city image where Suvela is a combination of the previously mentioned city image types and which has been particularized with districts, edges, nodes and landmarks.

Immigrant women’s landmarks were recognizable and/or named buildings or marked places. Buildings stood out from their environment by colouring, size or placement in relation to the street. Marked places differentiated from their environment with a sign that either was a part of some building or functioned almost independently like a bus stop. The definately strongest landmark for immigrant women was the Kirsti school. 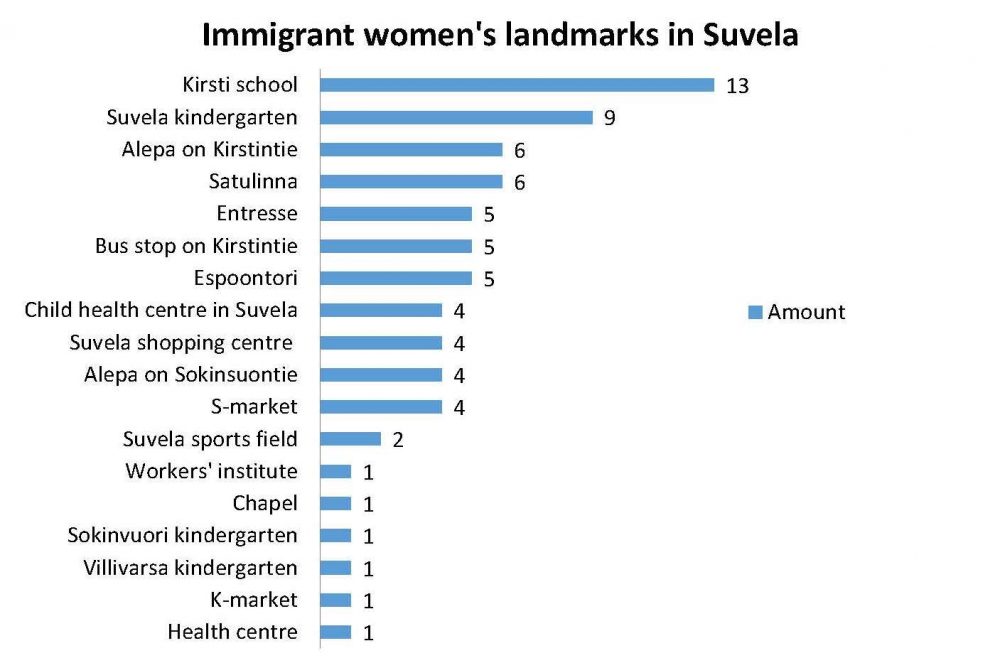 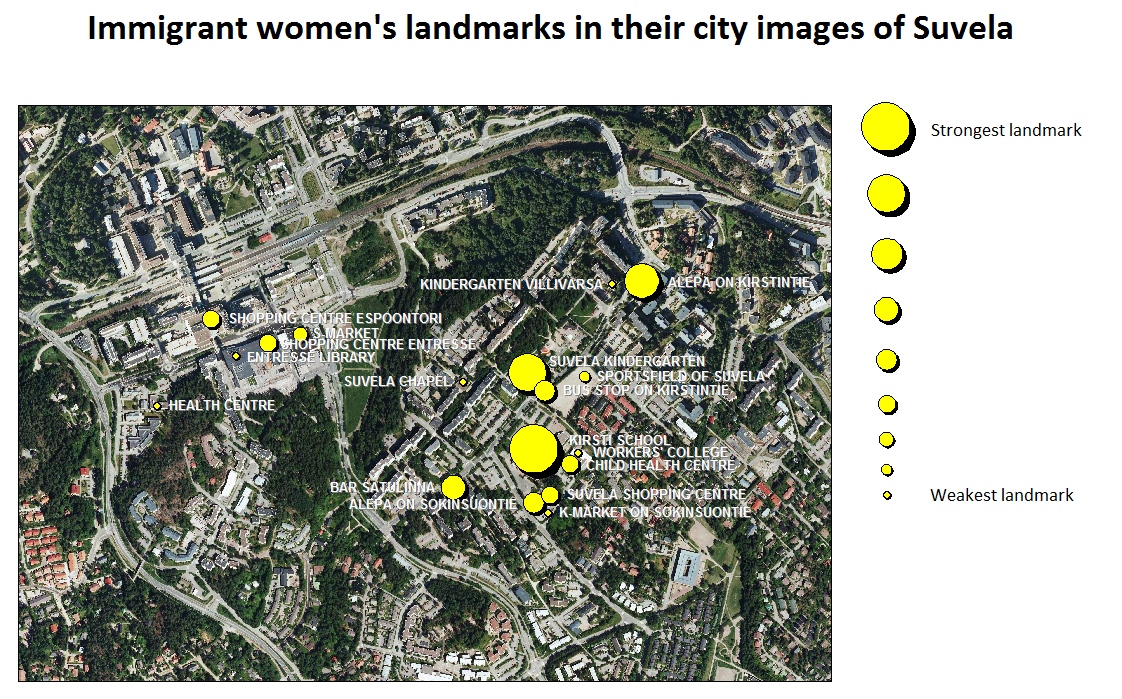 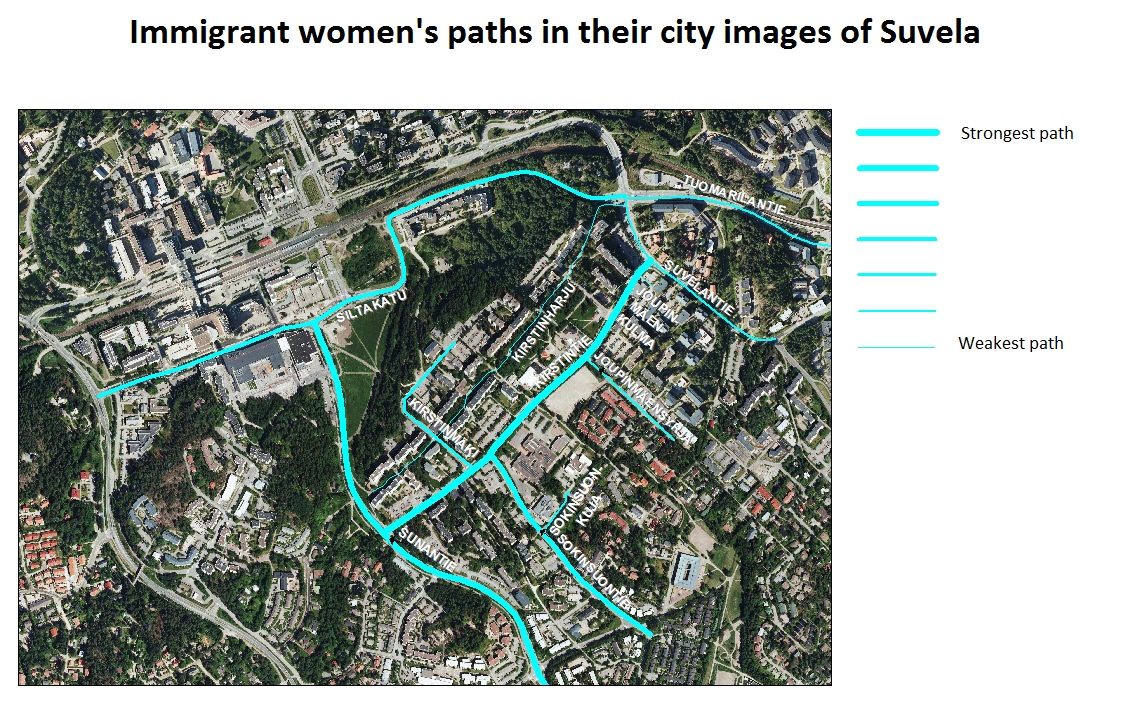 Immigrant women’s nodes were crossroads of the busiest streets and places that were shown central in the map drawings and that could be entered in. None of the nodes in Suvela rised clearly above others so that they could function as the centre of the area. The best distinguished nodes for immigrant women were the residents’ park of Suvela and the crossroads of Kirstintie and Sunantie. 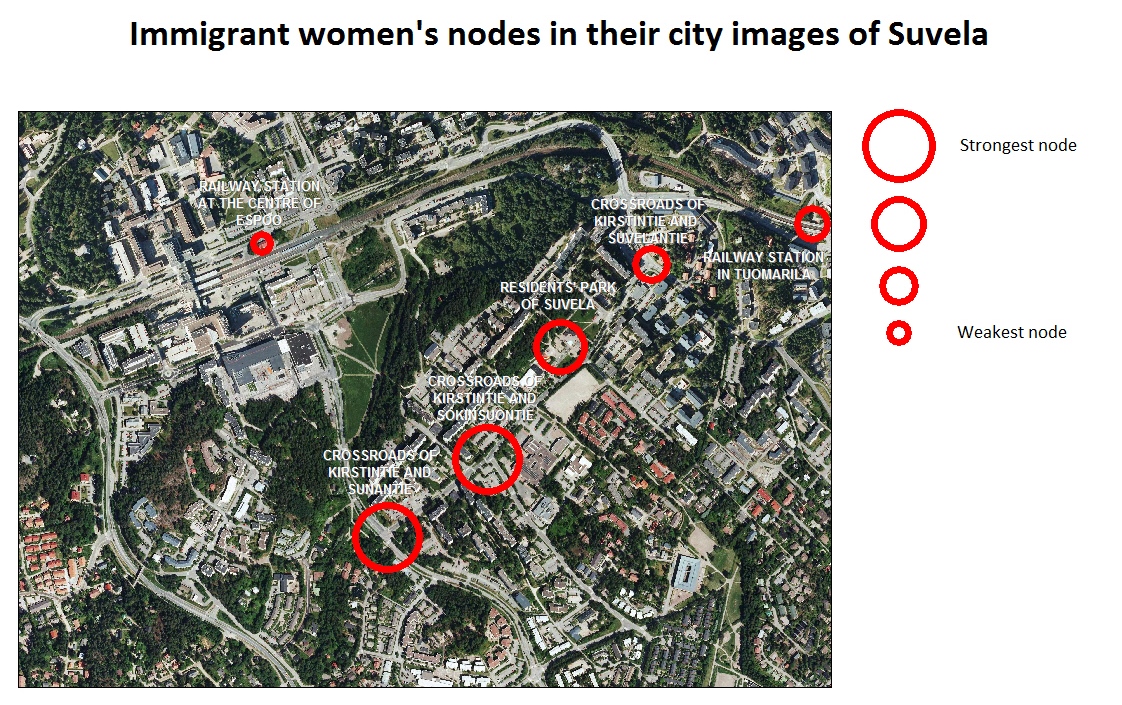 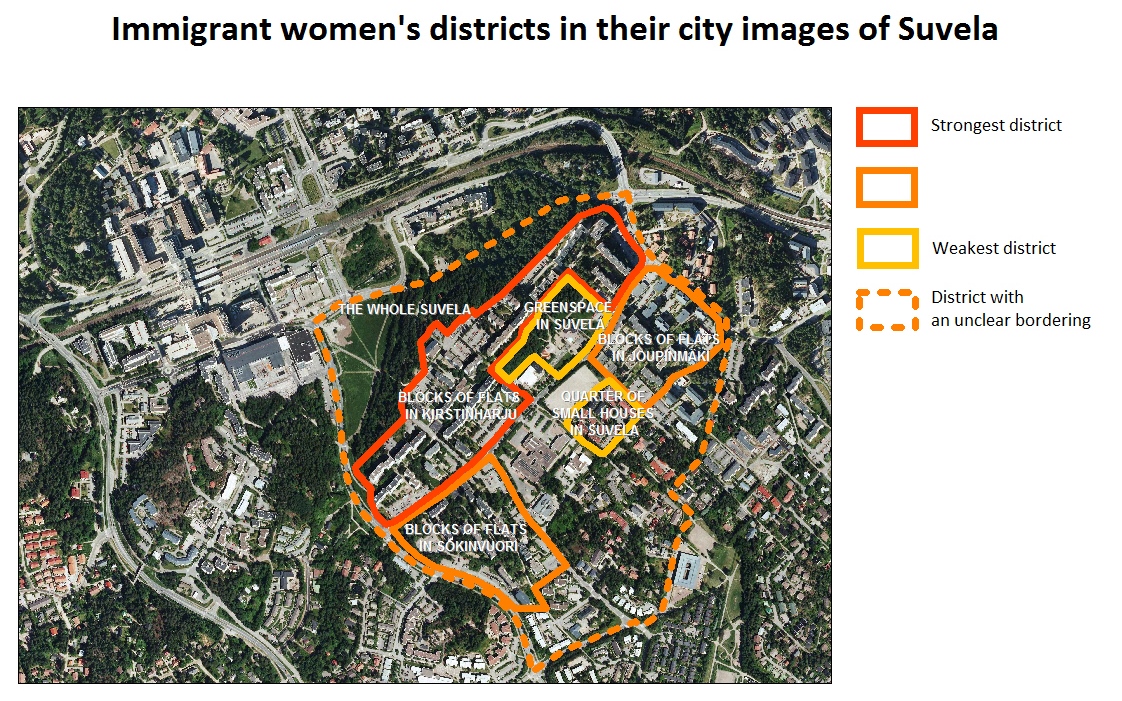 Immigrant women’s edges were straight fronts or columns of buildings that separated different districts from one another. All the edges were of a similar kind and were not easily distinguished in the built environment. The strongest edge for immigrant women was the front comprised by the blocks of flats in Kirstinharju.

COMPARISON WITH THE FINNS AND WITHIN IMMIGRANTS

There were no big essential differences between immigrant and Finnish women’s map drawings. Even though the research material is small, the following conclusions can be made: 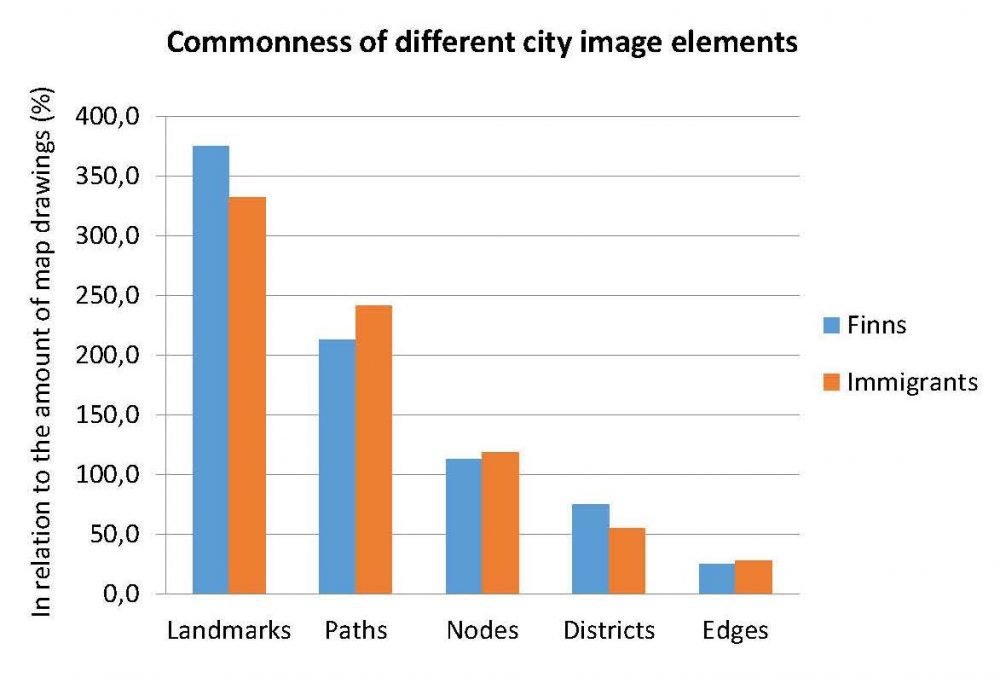 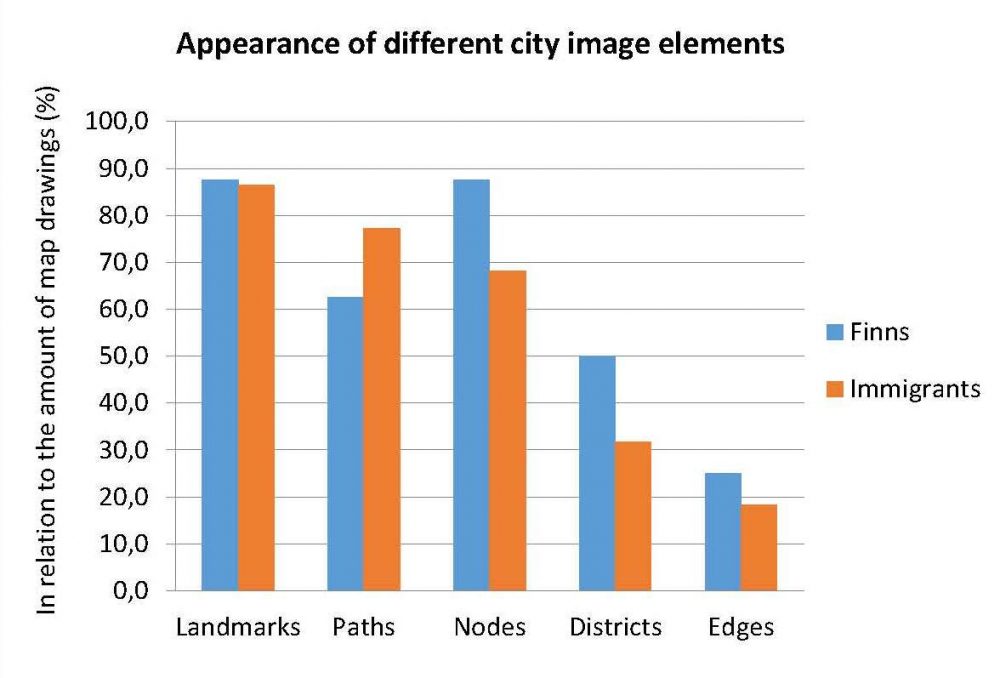 In order to examine whether the cultural distance has any influence on city images, I divided immigrant women into two groups and compared their city images to each other. The two groups consisted of 1) those immigrant women who had emigrated from another European country or a country that used to be part of the former Soviet Union and 2) those who had emigrated from a developing country in the so-called third world. Surprisingly, there were bigger differences in map drawings within immigrant women’s group than between immigrant and Finnish women, as the following claims show:

The longer the cultural distance was, the fewer different kinds of city image elements there were in immigrant women’s city images. Immigrant women, who came from the developing third world countries, used most landmarks, paths and nodes, while others used also landmarks and districts. It seems on grounds of this case study that when the cultural distance is short, that is: the built environment does not differ so much from your own, you can grasp the city structure visually. Correspondingly, when the cultural distance is long, it is easier to read the city structure in a narrative form as if you were telling the different places as crossing routes, bundling nodes and nailing landmarks to yourself or to somebody else.