The subresearch questions for walking interviews were

The reason why I decided to use walking interviews (or guided walking tours as I called them at first according to their exact translation from Finnish and their Swedish counterpart ’gåturer’) was to find out, which features in the built environment of Suvela would bring conscious or unconscious positive reminiscences from their home country.

I planned the walking route before the previous sections of my case study based on what I presumed to be everyday hubs for immigrant women who have children: home, kindergarten, school, shops, playground and child health centre. I added Kirstinharju pedestrian street and Kirstintie to them, because I wanted to know, which one immigrant women would use, Kirstinharju pedestrian street or Kirstintie when passing to the centre of Espoo, for example. Their mutual relation has also been decisive for the development of the whole housing area. The last addition was Suvela park, because I wanted to find out, whether greenspace is as important to immigrant women or not. All the stops along the walking route were:

We stopped in each place and I asked there immigrant women to observe, think and discuss together with the support of the following questions and instructions that I delivered and read to them (the original text was in Finnish):

The research material consisted of my notes that I had written about the discussions with the immigrant women during the walking interviews as keywords and later on as complete notes.

I found the 8 attendants for the walking interviews during the earlier phases of my case study. They represented the following nationalities:

Because it was very difficult to find the participants in the first place and because communication would be easier within one ethnic group for the second, I ended up arranging three separate walking interviews for each nationality: on 25th September for the Estonians, on 2nd October for the Vietnamese and on 16th October for the Somalians. all in 2011. Each one of them started at 2 p.m. and lasted for two hours.

In this section of my case study I did not have any reference group of Finnish women, because my original aim was to use walking interviews for the comparison of cultures in order to define, how the built environment could be modified to make it remind more of immigrant women’s own culture to ease their integration process.

However, the walking interviews showed soon that this was a very naive presumption for two reasons. Firstly, immigrant women’s cultures represent such a vast spectrum that it is impossible to produce a built environment that would have features equally from each of them. Secondly, immigrant women focused spontaneously more on general development of the built environment than on comparison of cultures during walking interviews.

The reason for immigrant women’s lack of interest in cultural differences lied in a phenomenon which I call the integration paradox. Those immigrant women who participated in my walking interviews had all immigrated in Finland for 15-20 years ago, which meant that they were already well integrated or assimilated in the Finnish culture.  This, in turn, made them more blind to cultural differences compared with those who would have come just recently. On the other hand, the newly-arrived are only in the beginning of their integration process and have often such problems with the new language and culture, that they do not have enough language skills or other resources to be able to participate in city planning.

Furthermore, the walking interviews showed that these immigrant women who had lived in Suvela already for long, had a lot of tacit knowledge of their housing area just like any other Finnish dweller in Suvela.

I have therefore divided my research data into three groups:

Some of the places along the walking route do not exist in immigrant women’s home country at all or they did not exist at the point of their departure. All the attendants had immigrated to Finland from a country where the GNP is lower than here and where many of the basic municipal services are therefore lacking. This made it impossible to compare residents’ park of Suvela and Suvela community centre and even Suvela shopping centre and Kirstinharju pedestrian street with its Suvela park. When comparing the rest of the urban places attendants mixed their physical circumstances and social activities together.

Because the attendants represented very different cultures, some of their notions were contradictory with each other: What was similar for some, was different for others. This shows how heterogenous a group immigrants are and how difficult it is to take their needs into account in city planning.

The attendants discoursed the cultural differences of their built environment by dividing them either to similarities or to divergences in the following way:

The attendants presented most of their notions without valueing the divergences. However, the attendants started valueing some spontaneously outside the question and instruction framework. According to the attendants the following features were on average better in the built environment of Suvela than in their home country:

Correspondingly, the following features in the built environment of Suvela were on average worse according to the attendants:

–  unformed and untidy wastelands which do not seem to belong to anyone and which
generate undesirable behaviour (littering and urinating)
–  special so-called drunks’ bars, even though it was also considered good for dwelling that
drinking is concentrated in certain building.

DEVELOPMENT OF THE BUILT ENVIRONMENT

Even though the questions and instructions for the walking interviews tried to guide attendants’ observations and discussions towards the physical circumstances of the environment, the attendants saw the social activities as an inseparable part of the built environment also here.

The scale of development proposals varied highly from small structures and details to whole buildings and areas. The development proposals aimed at improving either security, general athmosphere or cleanliness of the housing area. Immigrant women suggested different kinds of means to achieve these aims. The means can be classified based on the grade of changes in the following way:

Attendants’ most important development proposals concerning the physical circumstances of Suvela were:

The most important development proposals concerning activities in Suvela were: 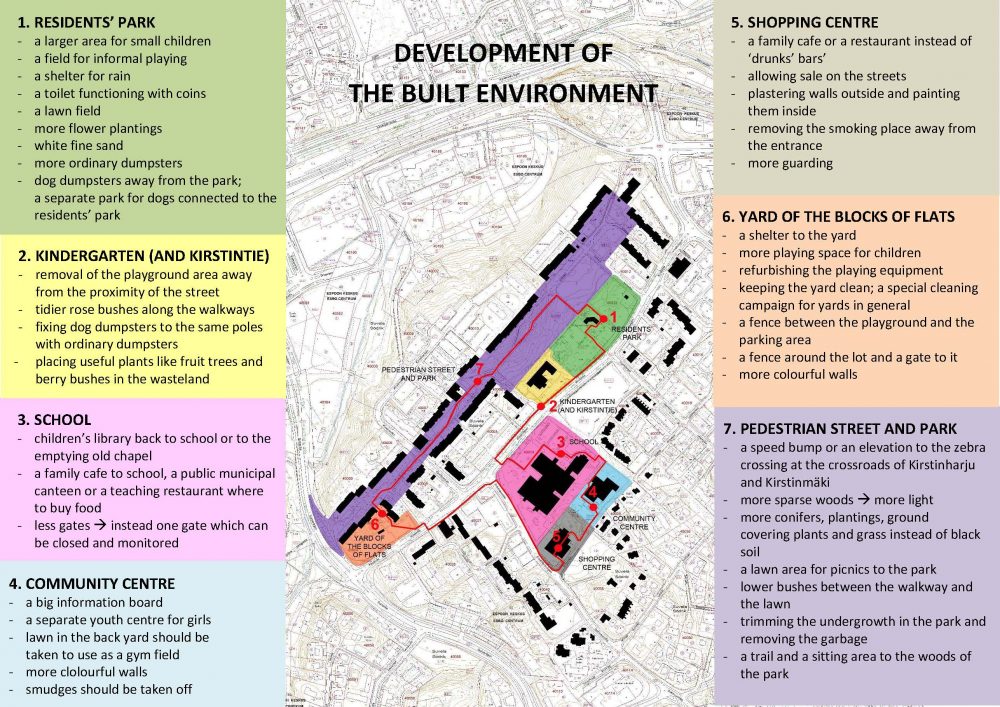 Tacit knowledge means here all the information about the research area which is not directly searched for but which is nevertheless gained during the walking interviews either from the attendants themselves outside the framework of questions and instructions or with the help of my own observations. Thus tacit knowledge is sort of answers to questions that have not even been made.

Tacit knowledge came up in places where we stopped and also elsewhere in situations where the discussion seemed to go on the sidetrack outside the actual framework of questions and instructions.

The tacit knowledge included either

The tacit knowledge can be divided into three groups: the physical, social and cultural environment experienced by the attendants.