I have just added some pictures in the header of each page at this net site. I made the pictures out of videoclips from a TV-document that I found on Youtube (Lähiöstudio, suvela nuorten silmin). The TV-document tells about the second wave urban regeneration in Suvela: the so-called SOFY-Project. You can find more information about it in my History-page.

I wanted to show you a glimpse of Suvela right on the front page. At first I planned to make a panorama of Suvela seen from the direction of the railway station of Espoo. The high blocks of flats form a uniform and handsome silhouette, which is like the wall of China when winding and conforming to the contours of Kirstinmäki hill.

However, this view would show Suvela seen from the outside, not inside. It is nevertheless the insiders’ view that I am trying to grasp in my research. Happily, I came across the previously mentioned Youtube-video where I noticed a widescreen camera run about the blocks of flats seen from the school yard – bingo! The picture shows Suvela in its early days, clear and bare.

At the same time I am totally aware of the fact that I can never fully get an insiders’ view of Suvela as a researcher. As a matter of fact, I do not even try to get one since there are as many views of Suvela as there are viewers. According to Donna Haraway, an American feminist, the knowledge is always scattered and embodied in certain situations, certain places, certain people, certain bodies. Therefore, I have duplicated the picture of Suvela through different filters to a whole set of pictures which then represents this manifold of views. The different pictures are like reflections from a prism, my case study. 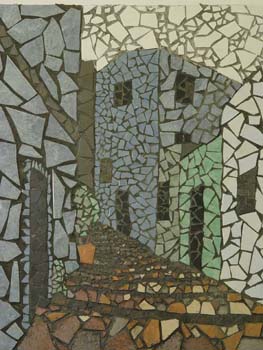