The Suvela Bazaar functioned as an illustration of the plan, which summarized the research findings concerning urban places: What kind of urban places should be planned in multicultural housing areas. The visitor statistics as well as the feedback both from the visitors and the organizors thus acted as an evaluation of the plan. They also tested if the research findings concerning participatory city planning methods were true or not both directly (the Suvela Bazaar as one of these methods) and indirectly (all the other methods helping to create the plan in this case study). Consequently, the visitor statistics and the feedback from the visitors and the organizors works as a triple review of the case study.

The visitor statistics is based on the estimations of the different organizors. It was impossible to follow, how many of the counted visitors participated also in other activity spots and were thus counted more than once. However, these inaccuracies affect immigrants and native Finns equally.

The visitor statistics shows that it was the main event day – Saturday – which scored the highest percentage of immigrant participants during the whole event week, over one third of all the visitors.

Because it was exactly the main event day that was built on the research findings concerning participatory city planning methods and urban places, it can be stated that the research was both reliable and valid.

FEEDBACK FROM THE VISITORS 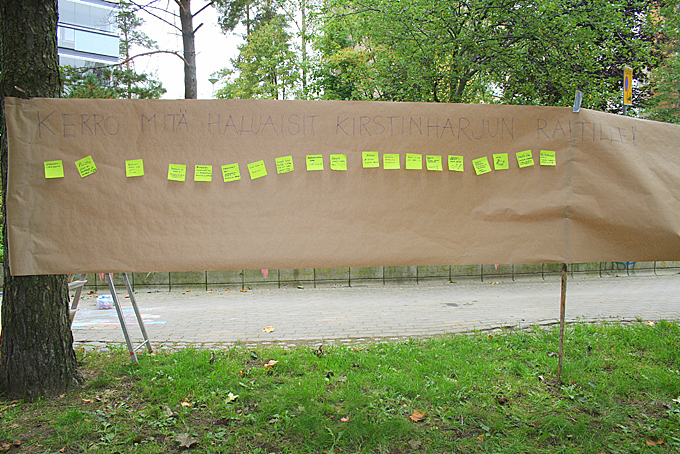 About 40 % of all the visitors who wrote notes were immigrants. Because I had the responsibility over the whole event, I was not able to document more accurately the people, who gave the feedback, or follow up, which feedback was given by whom. Nevertheless, the overall coherence of the feedback from the visitors can be seen as an evidence, how taking immigrants’ needs into account benefits also native citizens.

The feedback could be divided to four entities: 1) the Suvela Bazaar, 2) other events and activities, 3) urban places in general and 4) the Kirstinharju pedestrian street in detail. There were also some oral comments about the event I heard and wrote down by myself. All the written and oral comments can be seen in the list ”Feedback from the visitors”.

The common nominator for all the comments is thus the need for such events, activities, urban places and the pedestrian streets that the Suvela Bazaar made visible for dwellers.